The judges have received their entries and have begun reading through them! If you get the chance, thank them for all their hard work. There are a LOT of entries this year, and only such incredible judges make it possible to read them all.

Now, on to the fun stuff! The challenge ran for 9 days and resulted in nearly 700 entries! Here are the number of entries compared to previous years.

For the 2015 challenge everyone could submit 3 different entries. 2016 allowed one game entry and one supplement entry. 2017 allowed for each person to submit two entries. 585 people submitted one or two entries for this year’s challenge. Holy carp, Batman! That is a bunch of people who participated.

What have you done

I hoped that the challenge will push people to write and complete a game, especially if they’ve never done so. The image has been a little cut off, but the questions were:

I was so pumped to see that almost 25% of the participants had never written a game before! Glad this challenge encouraged them to take the leap. I was also surprised to see how many people participated in a LARP! It’s something I’ve never done, and it’s cool to see the popularity of LARPing grow over time.

How did you hear about it

I do my best to blast the news of the challenge far and wide, but it’s really up to the participants to share it with their friends and pass it along. We had a fairly even spread for social media news, with “other” dominating the numbers.

Some of the notable “other” responses:

As you can probably tell I’m VERY happy with how the new website turned out. It made the challenge a lot easier to manage, and it lets readers discover more incredible entries!

Since the site went live, here’s a chart of which dates had the most pageviews: 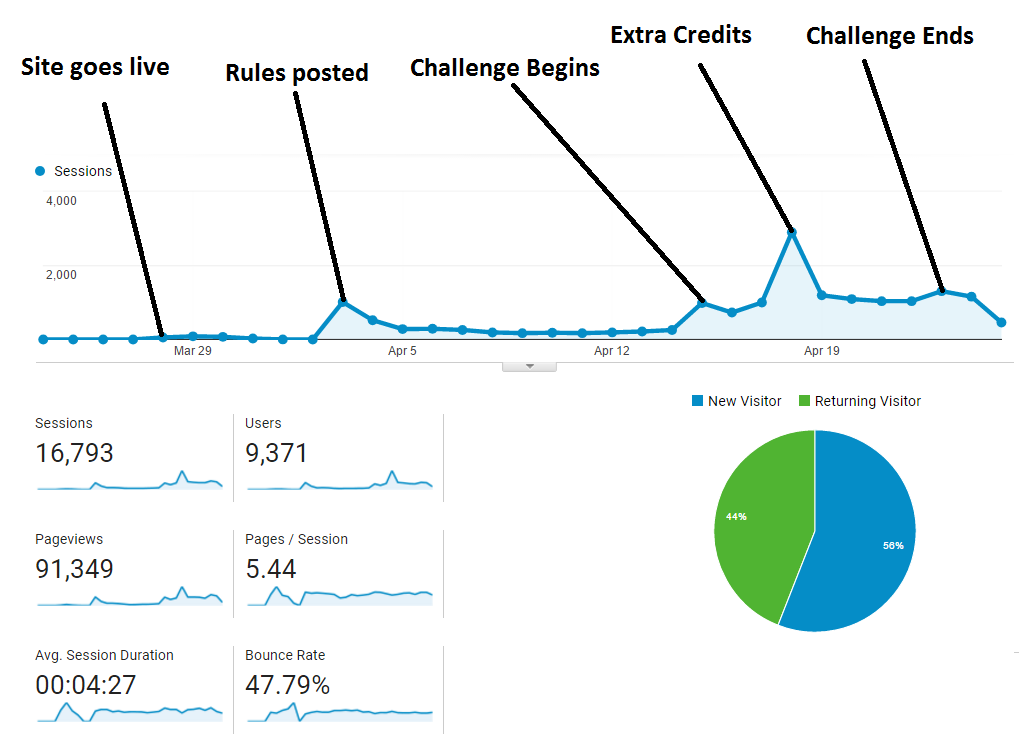 When Extra Credits mentioned the challenge the pageviews exploded! On that day Facebook (where EC posted it) made up over 75% of those pageviews. It’s crazy what a difference one or two popular mentions can make for an event.

Here you can see some of the top viewed pages. That 56% includes all non-submission pages (rules, judges, prizes, etc).

That means almost half of all the other page views are spread amongst the entries. I feared that most would just read the winners, or look at the prizes and then leave. But I’m glad to see people actually reading the entries and engaging with them. 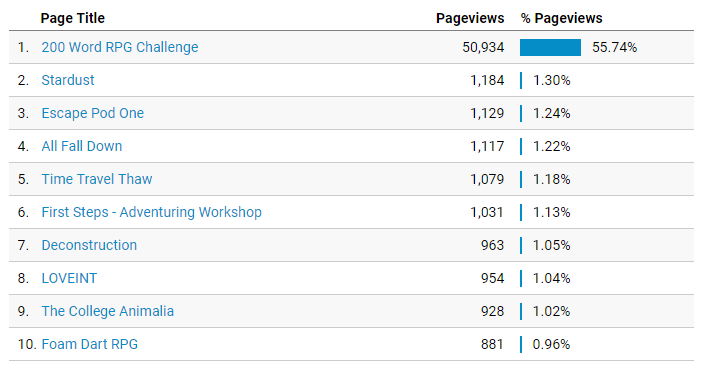 This year was bigger than both previous years combined! Thank you all for making such an awesome contribution to gaming. I’ve been run ragged getting all of this setup and working properly, so I can’t wait to sit down and read through some of these.

I’ll post another update when the judges have picked the finalists!